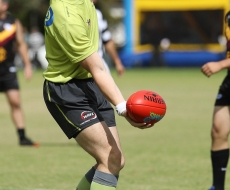 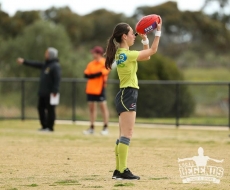 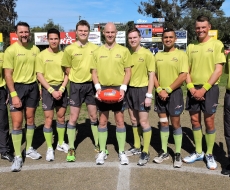 Always try your best and make an effort to keep learning. Most importantly, have fun and love what you do! Read More

Like many young umpires, Cameron began his career on the boundary, though circumstances tried to stop him getting on the field. Read More

Dean's umpiring journey began under the watchful eye of Terry O'Donnell, and the experience in his debut match continues to propel his career. Read More

At just 14 years of age, Robert Hill remembers being extremely nervous before his first game and equally fatigued afterwards. Fast forward six years later and he's quite the opposite Read More

Our latest field umpire to taste state football tells us how he got there. Read More

One of the most distinguished and longest serving umpires in the WRFL, Adrian O'Donnell is a name that, over the past 20 years, has become synonymous with senior football in the WRFL. He was inducted into the WRFL Umpires Hall of Fame in 2014 and became a Life Member in 2003. He... Read More

Christian joined umpiring via a rather unusual route. He started umpiring in Round 5, 2010 after spending 10 years in the Army Reserve as an infantry soldier. Read More

2018 The Brook Christmas in July

The Brook Point Cook are hosting a Christmas in July event on Sunday 29th July at 12pm. The event will be Christmassy and comprise of a 2 course meal and a visit from Santa! Read More

Following discussions between the WRFL, Umpires Director Mark Westgarth and the WRFLUA, the following has resulted: Read More

As pre-season nears, we take a quick look about what's been happening in our umpiring circles. Read More

We're well into the season now and there's been plenty going on in the group. Read More

An era ends...a new one starts

At the WRFL Umpires Association 2017 Annual General Meeting (22nd October) there was a big change in executive members... Read More

Four WRFL umpires have been accepted into the VFL for the 2016 season. Read More

The WRFL Umpires Association are currently looking for women to join its ranks. Read More

Earlier this year, Dean McGowan and Cameron Terill were selected from a group of the WRFL's most promising young umpires by AFL Victoria to officiate the match between Geelong FL and Eastern FL at Simonds Stadium. Read More

On July 17 2016, the WRFL Umpires Association was lucky enough to receive a community grant from The Brook on Sneydes in Point Cook. Read More

The 2016 End of Season Trip will be held AFL Grand Final weekend, Thursday 29 September to Sunday 2 October. This year marks a return to the trip's traditional Albury home. To celebrate the conclusion of a long season, come for a ride across the border and let your hair down... Read More

Rate yourself as a fantasy football expert? Read More

Dear Life Member, it has been a while since we communicated with you and we intend to make this update a regular occurrence in future. Read More

Rate yourself as a fantasy football expert? Read More

The 2015 WRFL Umpires Golf Day has been run and won. Read More

Footy tipping is back for 2015! Read More

Do you work for Telstra? Read More

The WRFL Umpires have defeated Grand United CC by 35 runs to take home the Stan Mielczarek Cup for the first time. Read More